Lebanon in the eye of the storm

What is going on?

The people of Lebanon have taken to the streets in the country’s largest protests since the end of the civil war in 1990. All sectarian affiliations appear to take part in these protests. There are 18 officially recognised religious groups in the very diverse Lebanese nation, but they appear to have found common cause against corruption, difficult economic conditions, and increasingly against the political system overall.

The spark for the recent unrest came from a decision to introduce a tax on previously free internet calls through web applications. It was enough to ignite demonstrations which started on 17 October and spread from the capital Beirut to the whole country at incredible speed.

In response, the “WhatsApp tax” was dropped, and a package of economic reforms was announced by Prime Minister Saad Hariri. The demonstrations, however, did not recede, and Hariri resigned on 29 October. Former finance minister Mohammad Safadi has emerged as the expected next PM charged with putting together a new government, a process that historically has proved long and cumbersome. It is worth noting that Safadi is viewed by many as yet another “establishment” leader.

The country is at a standstill, with protesters blocking roads, while banks and schools remain shut, and strikes at gas stations are causing disruptions. The financial and economic situation in Lebanon has deteriorated quickly, as political deadlock continues to hinder the formation of a much-needed government.

Stagnation, inequality and a lack of trust

Economic stagnation. The Lebanese economy posted record growth levels between 2007 and 2010 (9.2% on average), driven by a reconstruction programme post the 2006 war – but since 2011, a slowdown has eventually led to economic stagnation (Exhibit 1). The Syrian refugee crisis has been a major drag on the economic structure of Lebanon, already weakened by a fractious and corrupted political system, which in turn increased inequalities and fostered the anger now seen erupting on the streets. 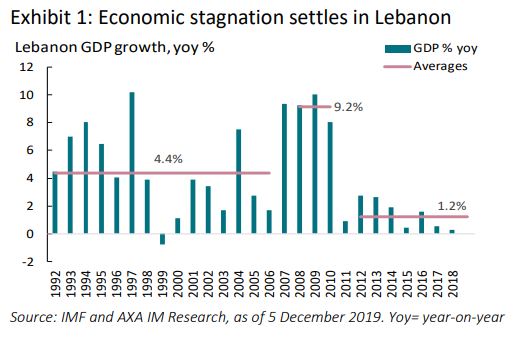 Services represent three-quarters of overall output - in 2018, industry, manufacturing and agriculture accounted for 14%, 8% and 3% of value added respectively. The main economic drivers in Lebanon are real estate, construction and tourism. Tourism accounts for nearly 20% of GDP, employing around 18% of the workforce. The sector was booming until 2011 when instability in the Middle East increased. Lebanon had also seen its real estate sector boom since the bursting of the real estate bubble in Dubai, while the Lebanese diaspora has proved a strong driver of growth in the sector. The unrest is a serious threat to these growth drivers.

Syrian refugee crisis. The country has been particularly hard hit by the Syrian crisis when a significant number of refugees have been hosted in Lebanon. The influx upset the demographic balance, and the labour market, while piling pressure on rents and infrastructure (Exhibit 2). 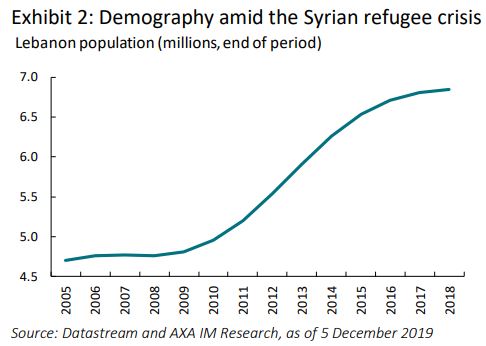 The international community has provided considerable support to Lebanon since the start of the Syrian crisis. Over $7bn has been given in humanitarian assistance since 2011, in addition to $232mn injected into the economy every year through cash assistance, according to the United Nations.

Fractious political system. Lebanon's governmental system is essentially a power-sharing arrangement between Christians and Muslims with proportional representation among the different sects within each religion. It emerged after the country's 15-year civil war between the factions ended in 1990. Consensus is inevitably difficult to reach (Exhibit 3). 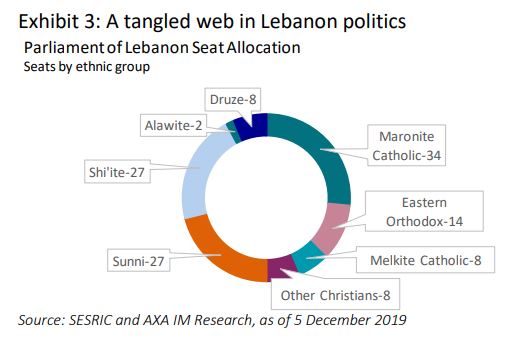 Corruption and inequality. The level of corruption is high – the country ranks 138 out of 180 countries worldwide on corruption perception, according to Transparency International. On a scale from 0 (highly corrupt) to 100 (very clean), Lebanon scores just 28 in terms of public sector corruption. The business environment has been worsening, with indicators of the ease of doing business dropping consistently over recent years – the country ranked 142 out of 190 countries worldwide in 2018, a drop of 22 places over three years. Foreign direct investments have fallen to below 5% of GDP lately.

Public services in Lebanon have been continuously mismanaged. The country is facing a massive waste-management crisis, with garbage piling up from the seaside to the suburbs of Beirut. According to consultancy McKinsey, Lebanon has the world's fourth worst electrical supply, ranked only above Haiti, Nigeria and Yemen. Corruption and a lack of structural reform transformed the power industry into a highly loss-making and unreliable sector. The 2019 Global Competitiveness report ranked Lebanon’s utility infrastructure as 99/141, with the sub-component or the reliability of water supply at 132/141. The quality of roads, ports and air transport is far worse than its neighbours.

According to the World Inequality Database, income distribution in Lebanon is among the most unequal in the world. Worse, the level of income inequality is rising. Since 2005, only the richest 10% of the population have seen their income share increase, while the bottom 50% have seen their share fall. The disparities are even more striking higher up the income distribution chain, with the top 0.1% of working people earning more than the bottom 50% (Exhibit 4). The benefits of past significant government borrowing (see below) have apparently failed to address growing poverty, while the tax system has further entrenched inequality. 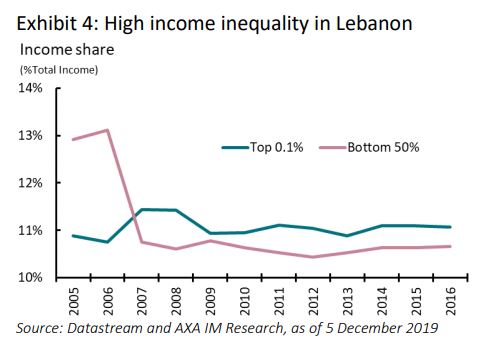 Lebanon’s vulnerabilities have been exposed

A twin deficit economy, and one of the highest debt ratios in the world. Lebanon has the third highest debt-to-GDP ratio – at 151% of GDP in 2018 - driven by consistently rising deficits. Last year, the government budget deficit reached 11% of GDP (Exhibit 5). More than two-thirds of government spending goes on servicing debt and paying civil servants, leaving very limited scope for government investment in the real economy. This is particularly unsustainable in a country largely reliant on foreign goods. The current account deficit has been hovering around 20% of GDP in recent years, fuelled by a weaker trade balance, while the country is highly dependent on fuel imports. Export competitiveness has been dented by strong increases in the real effective exchange rate since 2007 – the price of sustaining an expensive currency peg to the US dollar. Furthermore, the services balance has been pressured by shrinking surpluses from tourism and other services. Positive remittances have saved the day in the past, but they have also shown some declines in recent years - remittances accounted for 12.7% GDP in 2018 and were above 25% in 2009. 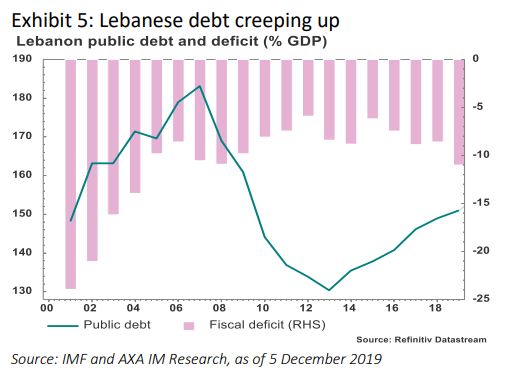 Lebanon has never defaulted in the past thanks to financial engineering from the central bank. Lebanon has never defaulted on its obligations despite heavy debt burdens. The central bank has been able to maintain financial stability over the years, seeking to shore up the bank’s reserves and raise the capital of local banks, the country's largest debt holders. As such, banks eventually preferred to lend to the government rather than financing private-sector investments, which continued to shrink, further depressing the growth potential of the productive sectors.

The banking sector link to sovereign risk. The banking sector has become an important player in the economic model of Lebanon thanks to its high exposure to sovereign risk. Its assets were worth 440% of GDP in 2018. The sector has significant dollar deposits (more than 70% at their peak), is well capitalised (capital adequacy ratio at 17%) and is profitable. But the strong link between bank balance sheets and the government’s financing scheme implies that any sign of a sovereign debt crisis could precipitate a serious banking crisis.

As critical financial inflows have slowed down, this financing model has come under scrutiny. The loss of trust in the banking sector started eroding banks’ liquidity, even before the protests began. In January 2019, credit rating agency Moody’s downgraded Lebanon’s credit rating to junk on an increased risk of default. Outflows continued as banks reopened after the first two weeks of protests. The imposition of controls on dollar withdrawals and transfers overseas has failed to rebuild confidence, rather increasing concerns that banks may not be able to help the government with its weighty financing needs. Sovereign risk has surged alongside a slump in investor confidence.

The moment of truth is quickly approaching

Lebanon recently repaid a $1.5bn Eurobond, avoiding a default despite the tumultuous conditions. The next bond payment is scheduled for March, when another $1.2bn Eurobond comes due. In order to avoid a sovereign restructuring or default, several important steps need to be taken. First, the country must regain its political capacity to act (including discussing with lenders such as the International Monetary Fund) by empowering a technocrat government that receives popular backing. By appeasing social tensions, the banking system could start to smoothly function again. Attracting further non-resident deposits is key to allowing the banking system to generate the foreign assets required to meet public financing needs. Importantly, the future administration must find the fiscal space to tackle urgent structural reforms, and to upgrade the country’s transport and energy infrastructure. A credible reform plan aimed at improving the growth potential of Lebanon and its governance would in turn contribute to a restoration of investor confidence. Without concrete reforms, Lebanon risks heading towards a combined currency, sovereign and banking crisis.