What is going on?

The first tensions started in Peru back in September, when President Martín Vizcarra dissolved Congress by decree. The country is now struggling with a de facto constitutional crisis.

Early October, in Ecuador, President Lenín Moreno scrapped fuel subsidies as part of an austerity package, via an International Monetary Fund (IMF) deal. This triggered mass protests that pushed the country into chaos, with hundreds of arrests, the declaration of a state of emergency and the deployment of the army.

More recently, the decision to hike subway fares in Chile has triggered protests which have spread and gained significant traction in a matter of weeks. Back-tracking these fare hikes was not enough and President Sebastián Piñera had to reach out further. He changed his administration, pushed forward a social spending package, and started creating a process of drafting a new Constitution for the country.

Elections at the end of October in Bolivia, which were to secure President Evo Morales’ position for yet another mandate – potentially his fourth - escalated into demonstrations. The President’s resignation and flight from the country has left a right-leaning interim leadership ahead of future fresh elections. Street protests continue.

Protests have also paralysed Haiti. Venezuelans returned to the streets as well, protesting both for and against the government of Nicolás Maduro, who still enjoys the loyalty of the military.

Anger seems to have spread across Latin American (Latam) continent. Attempting to compare these events to the “Arab Spring” risks oversimplification, with the motives for uprisings varying from one country to another. Yet they all converge into a common anger against their own country leaders who have further reduced redistributive policies in a region where income inequality is among the highest in the world. Furthermore, trust in political leaders has been seriously dented since the Odebrecht (the largest construction conglomerate in Latin America) scandal revealed that high ranking officials across the whole region were implicated in a massive corruption case. Public discontent has crept up amidst the region’s current economic stagnation as the commodity boom faded, revealing the structural dependence of these countries (Exhibit 1). 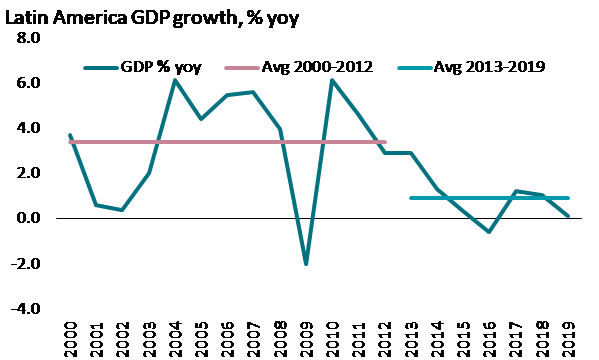 Latam GDP growth during the commodity boom period of 2000 to 2012 averaged 3.4% - even closer to 4% excluding the financial crisis. Governments were borrowing less and the region showed an average fiscal deficit of around 2% of GDP. Chile had an average surplus of 1.5% of GDP during the period. Since the commodity turnaround in 2013, average GDP growth in the region has shrunk to 0.9%, and it will most likely be just 0.1% this year (Exhibit 2). 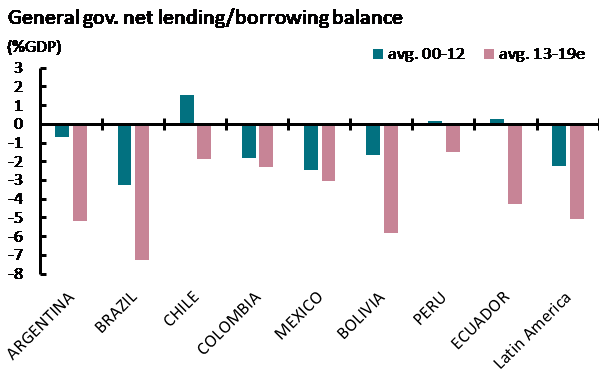 Latam fiscal deficits ballooned to 5% on average, and primary balances have turned from surplus to deficit. Austerity measures had to be enacted in countries where debts were spiralling dangerously higher, such as in Brazil and Argentina where public debt-to-GDP ratios respectively reached 88% and 98.7% in the second quarter of 2019. The economic opportunity – and trust in a better future – appears to have fallen for the region as a whole and is most likely contributing to the current turmoil. (Exhibit 3) 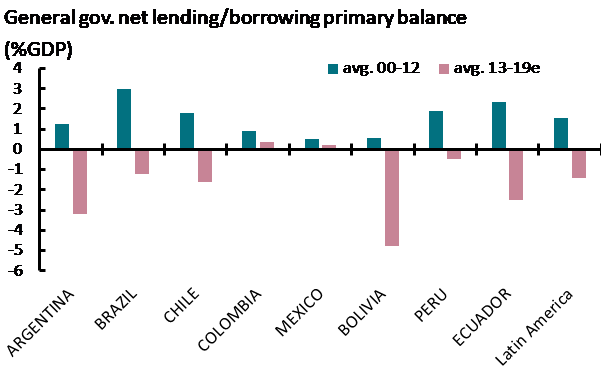 How far and how deep will this crisis go?

Since early October, currencies of the countries in trouble have depreciated. The worst performer has been the Chilean peso, which lost more than 10%. More recently, some currency weakness has been seen in Colombia where events have flared-up, but also in Brazil. As it appears, the Brazilian real's decline accelerated in November, after an auction of several oil deposits failed to attract sufficient foreign investors. Certain blocks received no bids as oil majors opted for capital discipline over expanding reserves at any cost. In the context in which Brazil is still struggling to recover from one of its sharpest downturns on record, the lack of incoming cash, could prove to be a serious setback for the country’s public finances. (Exhibit 4) 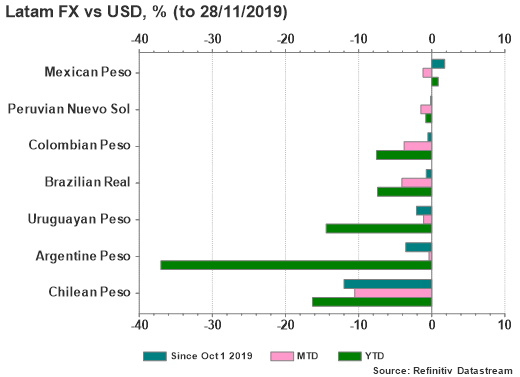 In the countries facing street protests, we see governments struggling. But they are trying to strike the right balance in order to restore calm. The extent of the concessions that the troubled administrations will have to deliver will depend on the strength of the mass protests. Leaders have by now better understood the depth of the crisis and their tone has become more conciliatory. In Chile, where debt is low, and external debt very limited, the President pushed a social spending program of US$1bn to $1.5bn (i.e. 0.3% to 0.5% of GDP) financed through the sovereign wealth fund, which holds assets worth of US$24bn. This may not be enough but the country appears well equipped to face this crisis and provide more liquidity if need be.

Given the significant fiscal constraint, Argentina and Brazil would have a much harder time dealing with such protests, were they to endure such a situation. Monetary policies were expected to provide some stimulus given the relatively disciplined fiscal stances and low inflationary pressures. But the current bout of currency weakness may limit room for manoeuvre. We have only limited insights so far regarding the extent of the portfolio outflows. The private investment environment was already very gloomy, while foreign direct investments were weakening amid reduced opportunities outside the commodity space. Current events are unlikely to improve these trends in the very short term, which could in turn prove a further drag on economic growth. On a more optimistic note, these protests may trigger an in-depth rethink of the economic models in the region which have all too often swung from either neoliberalism to populism – with no middle ground between the two. A positive, medium-term reassessment of economic strategies could evolve from the current backdrop. However, such developments are only like to occur in the longer-term – and as has been the case in Argentina – can also risk falling short if they do not quickly bear economic fruit. (Exhibit 5)

Exhibit 5: Latam in the EM context 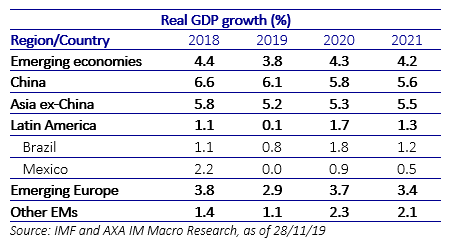 This website uses cookies to collect certain anonymous information when you visit our website (such as to measure and analyse information with respect to visits to our website, and use of our social media sharing tool). By pursuing your navigation on the website, you accept the use and installation of these cookies.

More information on cookies and how to change your settings