Japan – The land of the rising sun… and falling growth

Domestic demand is always the key

Domestic demand is set to slow in 2020 (Exhibit 1). The VAT hike will weigh on purchasing power into next year, but there are also more structural issues. Household precautionary saving has risen, despite continually rising disposable income. Changes to the public pension system and cutbacks in overtime payments remain the main concerns. Fiscal expansion might ease downside risks. The latest fiscal expansion was financed with revenue from the VAT increase as PM S.Abe has been wary of increasing government bond issuance. This included temporary measures to ease the pain on durable goods consumption and permanent one: offering free pre-school education from the age of three, improving the social security system and increasing the pension contribution. At the time of writing, the impact of the VAT hike is likely to be worse than expected and compounded by typhoon damage. This may prompt additional fiscal easing of around ¥5tn, to be voted upon in early 2020. 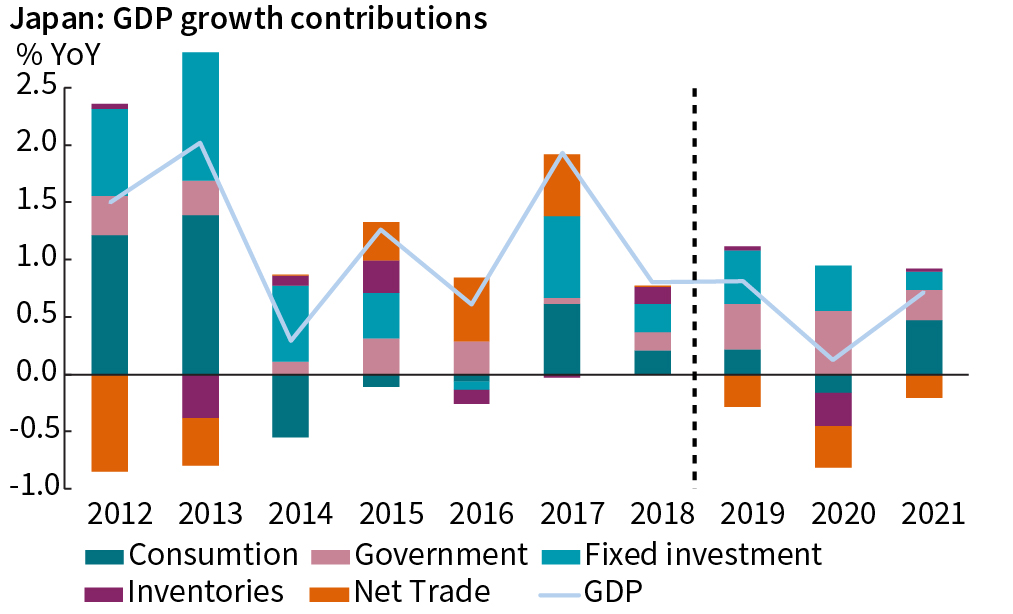 Business investment – which equates to 80% of total investment - is likely to decelerate, negatively impacted by softer domestic. Private residential investment is also likely to be affected by the VAT hike and public investment should decline after the Olympic Games in July-August 2020.

Trade tensions have disturbed global demand and Japanese exports have not been immune. In addition to some signs of easing tensions between the US and China, Japan concluded a limited trade agreement with the US, increasing imports of agricultural products. Meanwhile the US lowered tariffs on some Japanese industrial goods exports, with a market-opening agreement on $40bn worth of digital trade. The agreement did not mention auto tariffs, which would remain a risk. Conflict with South Korea will also have to be monitored, as it weighed on both diplomatic and economic channels. Overall, we expect a stabilisation in exports in 2020 and only a modest rebound in 2021. Net trade should continue to contribute negatively.

Core inflation - excluding volatile components - remains muted at 0.3-0.6% since 2018, far below the Bank of Japan (BoJ)'s 2% target. The underlying pace of inflation will be difficult to gauge in 2020 with companies not fully passing the VAT hike into final prices and some government fiscal counter-measures, such as free education, being disinflationary. Further ahead, medium term inflation pressures look set to wane as growth falls short of potential, increasing the economy’s excess supply. An increasing number of part-time jobs, and recent restrictions on overtime work, may also exaggerate labour demand. Recent labour market tightness has failed to deliver a material pick up in wages, suggesting a relatively flat Phillips curve. Import prices also present downside risks, as we do not expect a material pick-up in oil prices next year and the ¥ could rise later if US economic activity begins to soften again into 2021. Overall, core inflation should remain flat at 0.6% till 2021.

The BoJ will remain under pressure

The BoJ will have to navigate a difficult landscape of a shrinking output gap, falling household confidence and risks of inflation expectations falling. This suggests the need for further monetary easing. However, the central bank has reached unprecedented levels in terms of balance sheet size and seems reluctant to cut rates further into negative territory. Further rate cuts could be counter-productive, weighing on household confidence and financial sector transmission. Changes tied to a Loan Support Programme and a modification of the current tiering system could alleviate the impact on banks, but would also depend on credit demand, which is already high. There is more leeway over asset purchases. Net purchases of Japanese government bonds have steadily decreased since the introduction of Yield Curve Control in 2016 and could be increased again, although scarcity could become an issue. Finally, the BoJ is likely to reinforce its communication on the entire yield curve and not just the 10-year target. We believe the BoJ will delay rate cuts for as long as possible, only acting if yen appreciation risks more obviously threaten the domestic economy.