What lurks behind the obvious risks

2019 has been defined by binary risks in the global economy, with prominently the trade war between the US and China –potentially extending to the EU – and to a lesser extent, but very relevant for Europe, Brexit. Unsurprisingly, the high level of uncertainty has significantly dampened investment everywhere. By the end of the summer, the “natural slope” of the global economy was a gradual contagion from the already contracting manufacturing sector to services, and a major downturn in aggregate demand by winter had become plausible. Fortunately, some “non-negative” signals finally emerged in autumn.

Even if the details are proving difficult to finalise, a partial trade deal between the US and China is in the making which would at least prevent another escalation. The White House has stopped mentioning raising tariffs on European cars. In the UK, risks of “no deal” and hence a brutal drop in British demand to the rest of the world at the end of 2019 has become much less likely. 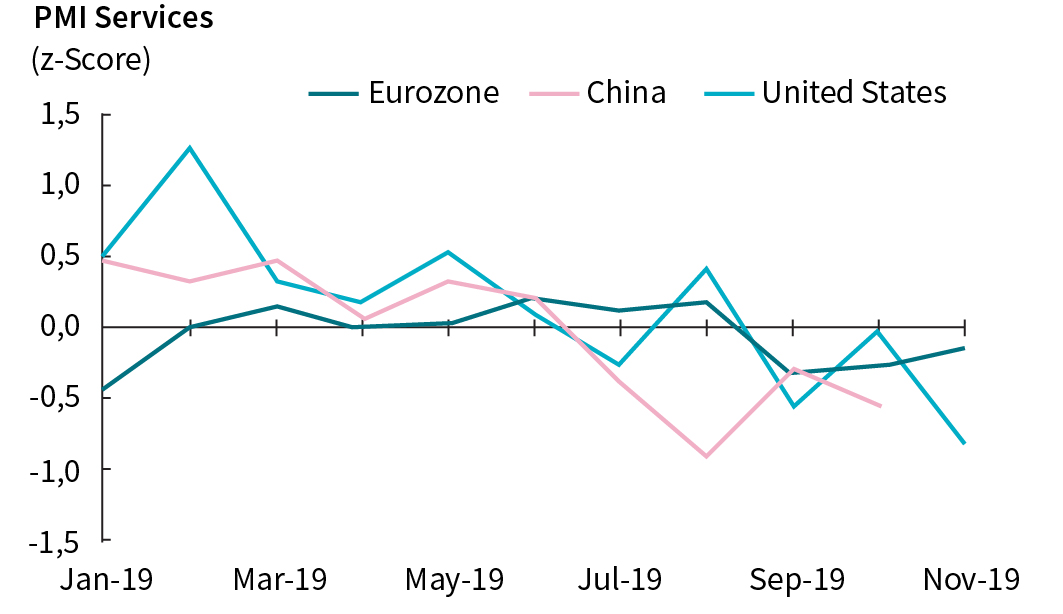 Of course, there is a measure of “acquired speed” in the global deterioration in sentiment (Exhibit 1) and confidence in services is likely to continue sliding for a while. but we do not expect this to translate to a late 2019/early 2020 global recession. Crucially, the labour market has remained globally solid, and consumer spending has continued to sustain activity in the key economic regions.

We don’t want to give the global economy the “all-clear” though. Risks are receding but lasting damage has been done. We think the “phase one deal” between the US and China will be enough to stop the escalation but we would be surprised if any of the tariff hikes implemented since 2018 would be quickly rolled back. In addition, in Europe, overcapacities have re-emerged, and it will take time to absorb them. Indeed, at the beginning of 2019 surveys were reporting a steep increase in production bottlenecks, output being increasingly constrained by a lack of capital and hiring difficulties. Finally, the ingredients for a convincing wave of investment were there. Unfortunately, these bottlenecks have now completely disappeared. We thus think that corporate investment is unlikely to re-start soon, even amid the news flow improvement.

Moreover. while the balance of immediate risks is improving, we need to take another look at “old headwinds”.

First, we should remember that the slowdown in Chinese demand started before the “trade war” and is likely to continue after (and if) it stops. Potential GDP is increasingly impaired by the demographic challenges, while the transition to a less capital-intensive growth model is also weighing on trend growth. The Chinese authorities have showed some restraint so far in their stimulus which probably reflects their willingness not to foster more domestic financial imbalances. If the impact of the trade war fades in 2020, we think they will be ready to show even more restraint and tolerate a further, gentle decline in GDP growth next year.

Second, on average in the euro area corporate profits have diminished on trend as a share of output. It is particularly striking in the case of Germany. This is another reason to be cautious about any rebound in business investment next year.

Third, in the US households have become less spendthrift while businesses have been leveraging up.

The US personal saving ratio has not started to converge back to the abysmal level it had reached before the Great Recession (3.7% in 2007), despite the extraordinarily low level of interest rates and unemployment. If anything, it has continued to edge higher lately (8.1% in Q3 2019, from 7.5% in Q3 2018). This might reflect a willingness to build precautionary savings while the memory of 2008 lingers, but we think more likely reflects demographic factors. This creates a “speed limit” to consumer spending.

Corporate debt has soared, and business profitability has deteriorated (Exhibit 2). This is not a major issue at the current juncture given the low level of interest rates – debt servicing is not impairing current expenditure – but gradually decision-makers in corporate America may be less keen on continuing to take more debt while scaling down a bit on their labour expenditure to preserve their margins. 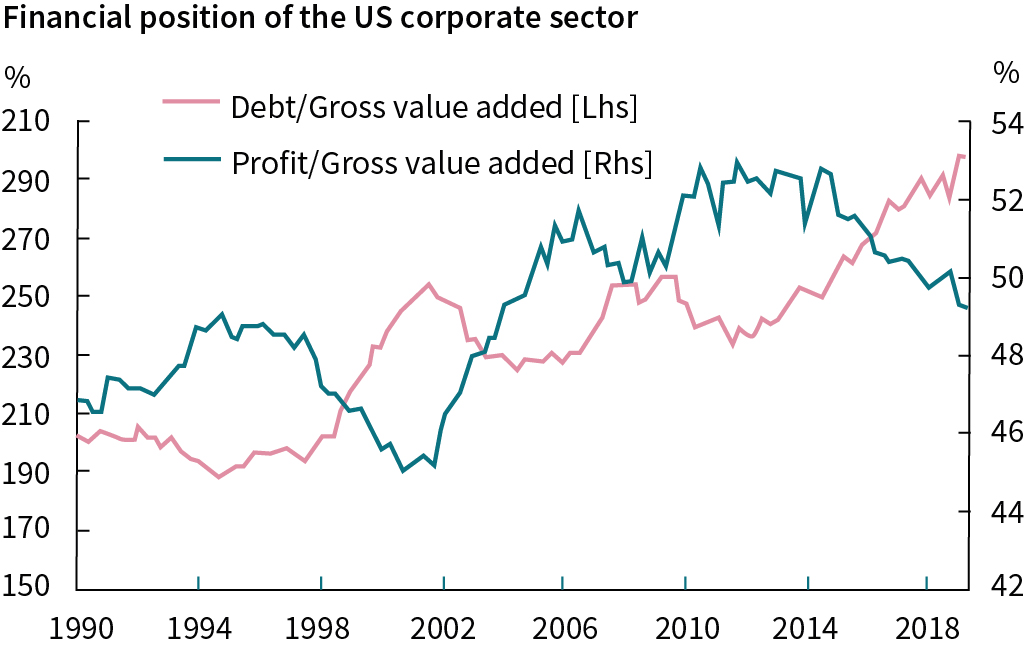 Finally, new sources of uncertainty have emerged. In the US, the most immediate impact of the impeachment saga is to boost the most radical Democratic candidates in the Primaries. With their regulation and tax-heavy platform, they may further add to the wait-and-see attitude on corporate investment decisions. In Europe, even if “no deal Brexit” is probably off the table, if the Conservatives win the General Election, a very painful negotiation process around a Free Trade Agreement with the EU will start, generating quite some noise. In the euro area, while political developments in Italy have allowed to defuse the tension with the European institutions, instability could come back there on the back of daunting regional elections and potential referendums. In Spain, the centre-left/radical left new alliance won’t be able to count on a stable majority while testing the limits of the country’s fiscal room for manoeuvre.

All in all, we think most major economic regions will see GDP at or slightly below its potential growth, with the exception of the key emerging countries outside China. Indeed, 2019 has been a very tough year for Turkey, Brazil and Mexico. A mechanical rebound is likely, especially since a more accommodative monetary policy in the developed world will ease external financial pressure on these economies.

What’s to stop the global economy to fall below “stalling speed”?

It is very rare that GDP growth stays in line with potential for very long. From that base, any tiny shock and the labour market starts deteriorating and the usual accelerants play their part. What often nudges the economy towards the sunny uplands of strong growth is a nice policy push. We do not think this will be forthcoming and, consequently, we expect global growth to slow further towards the end of 2020 and in 2021, to a state of quasi-stagnation.

True, the Fed has been pre-emptive this year, but we should balance its willingness to act fast with the quantum of accommodation. Using the Fed’s own model, the 75bps in cuts amounts to a stimulus of 0.3-0.4% of GDP, not enough to fully offset the previous tightening. We think the FOMC will be forced to ease further at the end of 2020 when it realises that overcapacities are rising again, but this would be more reactive than pre-emptive, and even if the Fed goes “all the way” the quantum of support should not be overstated (bringing the Fed Funds to zero would lift GDP by 0.8%... after two years). We also need to take the fiscal side of the equation into account. In 2019, we were still benefiting from the last ripples of the 2018 fiscal push in the US. The fiscal room for manoeuvre is now non-existent in America, with a deficit close to 5% of GDP, especially in an electoral year with a divided Congress.

In Europe, monetary policy has reached its limits and even the centrists within the Governing Council have been highlighting the side-effects of its non-conventional instruments. On the fiscal side, the only relevant space is in Germany. There we think that in 2020 automatic stabilisers will be allowed to play but we don’t think a proper discretionary push will come before 2021, when the signs of a slack on the labour market accumulate. The political and institutional hurdles for a fiscal stimulus are high there and we think budgetary policy can only be reactive, not proactive.

How to trade such macro scenario?

Monetary policy has amplified an already strong “grab-for-yield” environment. As a result, performance has been solid across fixed income. The focus is shifting away from conventional policy tools, as central banks are in the process of re-thinking their strategy and their instrument mix. Looking ahead, elements of risk in fixed income such as low volatility, negative-term premia, liquidity risk, are likely to affect performance in the rates markets.

With risks facing the global economy moderating at the moment and interest rates remaining very low, we keep a constructive stance on equities moving into 2020, with a bias towards undervalued cyclical plays in the US, and towards select high dividend yield exposure with adequate free cash flow cover in the euro area. 2021 would be more challenging.