Eurozone - If only countries could give themselves a leg up

2019 growth dragged down by weak trade…

After an already sharp slowdown in 2018, economic activity in the Eurozone lost further steam in 2019. We expect it to round up the year with an average growth of 1.2% year-on-year (yoy), down from 1.9% in 2018. The highly uncertain external environment and global manufacturing downturn are the main culprits behind this deceleration, weighing on net trade (Exhibit 1[1]). Meanwhile, domestic demand has been broadly resilient. Private consumption growth slowed only marginally - to 1.2% in 2019 so far from 1.4% in 2018 - and services sector growth remained solid, despite four quarters of contraction in its industrial counterpart.

At a country level, Germany - the most export and manufacturing-oriented economy - is suffering the most. We see 2019 growth at 0.6% yoy, half the 1.3% pace seen in France, where targeted fiscal stimulus and the more inward, services-based structure of the economy have helped. Italian growth has been dampened by political uncertainty (0.2% yoy), while in Spain growth is resetting after several years of above-potential growth (2.0% yoy).

…with negative spillovers on investment into 2020

The main question looking ahead is whether the resilience of the domestic sector will be maintained. We expect that spillovers to the broader economy will increase over time and likely outweigh any globally-driven improvement in manufacturing and trade. Despite some respite recently, uncertainties persist: Brexit discussions still focus on the transition period, with no-deal risks at the end of 2020. In addition, a US/China trade agreement remains elusive, and the threat of US tariffs on European Union autos remains a risk for 2020. We would need to see a credible removal of these uncertainties to forecast sequential acceleration in euro area growth. Instead we expect growth to hover around 0.2% in the coming quarters, averaging 0.7% yoy in 2020. 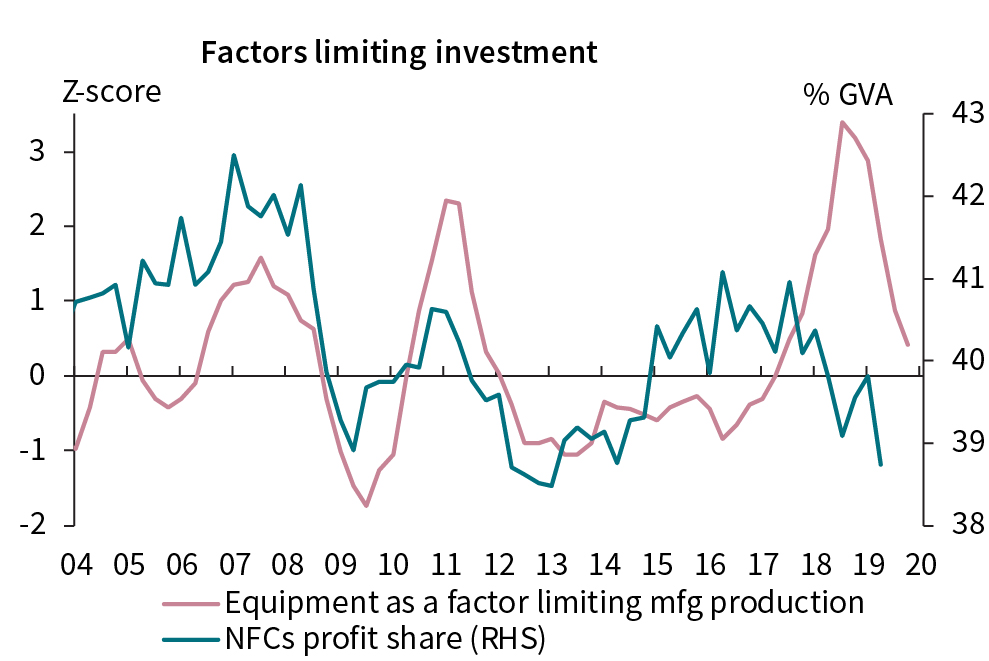 We see private consumption easing slightly as job creation slows, real disposable income moderates and the saving rate continues to edge up amidst persistent uncertainty. More importantly, investment should lose impetus in 2020, dragged down by several factors. First, after remaining solid in 2019, the European Commission survey shows that equipment is now a less limiting constraint to production (Exhibit 2) and a declining rate of capacity utilisation (the lowest since Q3 16) signals reduced need for capital expansion or upgrade. Second, the weaker external environment embodied in our forecasts of lower US and China growth should weigh on firms’ investment incentives, while net trade would remain a drag. Companies’ demand for credit has already softened, as per the Q3 ECB Bank Lending Survey, and the latest credit data suggest that the peak of credit growth is behind us. Finally, profitability should continue to suffer in an environment of still decent wage growth but sluggish productivity. Our outlook for 2021 is highly dependent on our US and China growth forecasts, and given our bleak scenario, we see 2021 Eurozone growth at just 0.5% yoy.

Below-potential growth means inflation should remain depressed over the coming years. Core inflation has hovered around 1.0% yoy in 2019. We expect it to rise at a broadly similar pace of 1.2% in 2020 and 1.1% in 2021, as a shrinking output gap, inertia and weak inflation expectations should keep counteracting wage growth.

The ECB challenge: keep face while doing nothing

Will that push the European Central Bank (ECB) to ease monetary policy further? In our view, the short answer is no. We think the deposit rate has bottomed, even with the mitigation brought about by tiering. We are not so concerned about the “reversal rate” - the point where policy easing becomes counter-productive from a technical point of view - than the social and political costs of reducing rates further into negative territory. Generating negative income for savers and twisting capital allocation can end up triggering a backlash against the central bank.

Dissent within the Governing Council against September’s renewed quantitative easing cannot be ignored when considering future balance sheet policy. Estimates suggest that QE could run at the current pace until mid-2021, before the question of the 33% issue/issuer limit rises. Until then we expect new ECB President Christine Lagarde to build on former President Mario Draghi’s rhetoric i.e. that monetary policy has reached its limits and can no longer bail the euro area out of every cyclical shock without the help from fiscal policy. The ECB strategy review, which will likely drag into mid-2020 - the preceding review lasted six months - may provide another excuse for inaction. Nor do we exclude the risk that the ECB framework review ends up in an exercise of reverse engineering. That could mean, for example, the ECB opting for a change in the definition of the inflation target - for instance to a range - to justify the practical impossibility for monetary policy to do more.

In this context, all eyes are turning to Germany, the only country to have both the fiscal space and the ability to trigger positive spillovers for the euro area as a whole. We think the labour market is key. If public opinion remains largely oblivious of the cyclical deterioration because the labour market remains resilient, Berlin would probably still refrain from any fiscal push.

However, the latest signals show a significant deceleration in job creation and not only in the manufacturing sector (Exhibit 3). We are not far from the pace of employment growth recorded during the 2012-2013 technical recession, which did not trigger a reaction from the government. Greater damage will likely be needed to trigger policy action, but we think we will get there in 2020. In particular, we believe that the government will ease access to “Kurzarbeitergeld” – the short-term worker funding where the government pays 60% of workers’ income shortfall for up to 24 months, if companies reduce their workload temporarily in a downturn. This would strengthen Germany’s automatic stabilisers and equate to a temporary fiscal boost. Other measures could include support for families and a corporate rate tax cut, although the latter is more controversial within the grand coalition. Another boost, of €10.9bn per year, or 0.3% of GDP, should come from the abolition of the solidarity income tax surcharge for 90% of taxpayers from 2021, despite a regressive composition. Overall, these measures could see fiscal stimulus of around 0.7% of GDP to German growth in 2020-2021 but it will be tied to a worsening labour market. 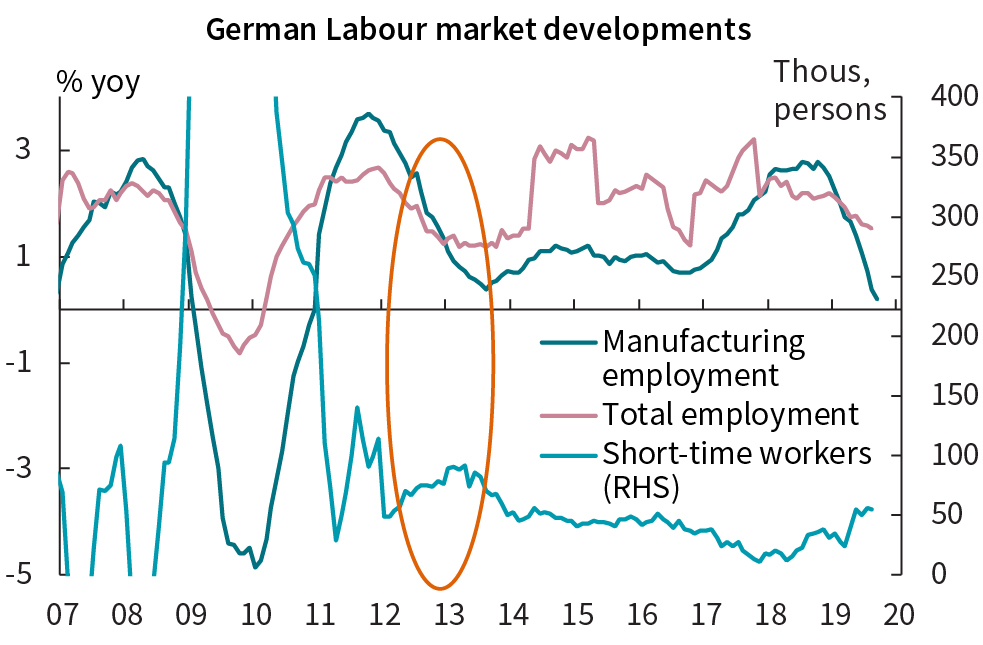 Even if we were to get a broad-based fiscal push across euro area countries, we remain sceptical of the possibility to advance on fiscal mutualisation. For that, we would need political will and a clear consensus within the European Council. The fact that a lot of national governments are busy facing significant existential issues on their domestic turf will likely result in political inaction at the European level. Italy’s new coalition is fragile, Germany is dealing with its own challenges as Angela Merkel’s leadership is fading, France is getting ready for another winter of protests that could materialise in votes in the Spring municipal elections, and Spain is struggling with political paralysis. The European Council’s Budgetary Instrument for Convergence and Competitiveness is a wasted opportunity, reflecting division amongst members over further integration leaving it small, co-financed and with almost no potential role for stabilisation. Separately, the recent proposals by the German Finance minister for a banking union contained a lot of red lines. We fear that European structural features will remain fragile, despite the current predicament calling for action.

This will be a risk if a more pernicious slowdown were to materialise.

[1] The investment profile is blurred by large swings in investment Irish data.