In the Netherlands, the spread of mortgage rates over government bonds, their long duration, low default rates and low capital charge has attracted new, long-term institutional investors to the market. These characteristics may make Dutch mortgages attractive for incorporation in a liability matching portfolio, depending on an investor’s objectives and regulatory framework.

Investors beyond the Netherlands and the Eurozone, seeking to match their long-term liabilities, may also benefit from incorporating Dutch mortgages into their portfolios even after taking currency hedging into consideration.

According to a Dutch saying, “The clock ticks at home, as it ticks nowhere else.” Over the past years, Dutch institutional investors have become attuned to the workings of the Dutch mortgage market along with, more recently, investors from outside the Netherlands. Non-bank lenders have quickly seized the investment opportunity afforded by mortgages in the Netherlands, which could be advantageous in a liability driven investment framework owing to their long duration and the yield pick-up versus government bonds—in absolute terms or relative to capital charges.

Amidst the iconic windmills, sit predominantly prime assets against a backdrop of a low rate of credit incidents1 and a creditor-friendly legal environment. In this article, we weigh the pros and cons of Dutch residential mortgages from an institutional investor’s perspective.

to reach up to €875bn by 20252 owing to a strong dynamic in new loan origination3. This market has been transformed in the span of a few years. Domestic deposits of €389bn are insufficient to finance this debt, leaving a funding gap exceeding €260bn in 20154. Recently, new non-bank lenders have entered the market, drawn to the yield pick-up Dutch mortgages offer versus Dutch government bonds (Figure 1). According to Ortec Finance, a technology and advisory services provider, “Government paper has become less attractive as a hedging instrument because of declining yields. As a result, institutional investors are partly replacing Dutch government bonds with mortgage investments”5. 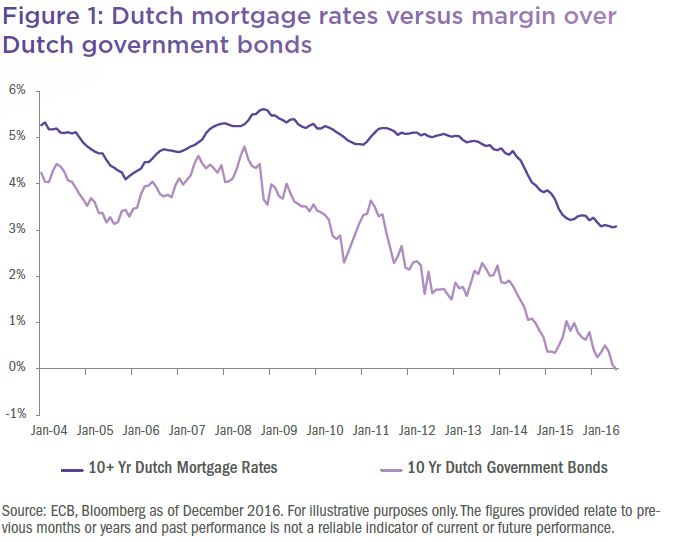 The entrance of insurers and pension funds has provided a complementary source of funding to the market, and these players now account for around one-third of new loans and one-quarter of outstanding mortgages6. At the same time, the Dutch banks’ market share of new loans fell from c. 80% in 2006-2007 to less than 60% in 2015-2016, further illustrating the diversification of the investor base7.

Figure 1 shows a positive spread of mortgage rates over government bond yields, driven largely by the bank deposit funding gap (as mentioned earlier) and Dutch banks’ need to source most of their refinancing for long-term mortgages from financial markets(unlike the case in Germany or France). In fact, spreads which widened between 2008 and 2011 are currently close to their widest historical levels because higher liquidity and capital requirements have made it more expensive for banks to keep mortgages with long maturities and high loan-to-value (LTV) levels on their balance sheets. For the foreseeable future, the size and long-term nature of the funding gap can be seen as a driver of sustainable spread levels, independent of the creditworthiness of the asset class.

The Dutch mortgage market is mainly comprised of fixed rate loans. It is predominantly of prime quality, which means that borrowers do not have documented credit issues and properties are usually owneroccupied. A Code of Conduct that governs mortgage lending practices is designed to emphasise price and service competition along with affordability. Slightly less than half of new mortgages, and particularly those with high LTV levels8, benefit from the Nationale Hypotheke Garantie (NHG)9—a guarantee provided by the Foundation of the Guarantee Fund for Homeownership, which is backed by the Dutch State. As part of the NHG programme, loans fulfilling certain conditions, in exchange for a 1% up-front premium, may receive a guarantee and be offered a c.50bps discount on interest rate compared to standard mortgages with high loan-to-value. For lenders, the lower interest rate can be rationalised by the guarantee: the NHG covers 90% of the outstanding principal losses, accrued unpaid interest up to two years and disposal costs (after default and foreclosure) in case of an unforeseen life event. At the time of writing, the foundation, which acts as guarantor, has sufficient capital to cover over 20 times the mean level of losses over the past seven years10. The Dutch Central Bank considers the NHG a Dutch state guarantee and the foundation benefits from the same credit rating as the Dutch State11.

1 Source: Moody’s as of December 2016. Lowest rate in main European markets of arrears over 90 days across prime RMBS indices. For illustrative purposes

only. The figures relate to previous months or years and past performance is not a reliable indicator of current or future performance.

This website uses cookies to collect certain anonymous information when you visit our website (such as to measure and analyse information with respect to visits to our website, and use of our social media sharing tool). By pursuing your navigation on the website, you accept the use and installation of these cookies.

More information on cookies and how to change your settings